Startups in Africa are solving real challenges, downturn or not

Earlier this year YCombinator, the leading Silicon Valley based accelerator program, sent a letter to their cohort, which was entitled "Economic Downturn," advising startups on how to adjust their fundraising strategy and their spending in light of troubling macro-economic prospects.

As it has turned out, both the macro economy and the capital markets are in a severe slump. The cytokine storm of sorts in the global economy, triggered by Covid-19, where draconian shutdowns, followed by stimulus packages financed by printed money, has led to severe macro-economic dislocations. Unprecedented inflation, an obvious consequence of nearly $18 trillion of new money issuance by the Central Bank of the US, and equivalent amounts in the EU, is changing consumer spending patterns and threatens to make everyone poorer. Covid related profiteering by global logistics companies, leading to 4x increases in profits, and mucked up supply chains, in addition to the grey swan of war in Ukraine, has made the cost of inputs dearer for everyone.

The capital markets have also suffered. Given the prospect of double digit inflation, western central banks are increasing interest rates, reducing the value of future cashflows that support the value of technology stocks. Stocks of FAANG companies (Facebook, Apple, Amazon, Netflix and Google) are down an average of 41%. Meta, the parent company of Facebook, Instagram and Whatsapp, is down 53% YTD. With the overindexing by wealth managers into these formerly booming companies, the downturn in the public equity markets has led to substantial losses for investors.

Crypto markets, which may be interpreted as sponges for excess liquidity, increasing prices during periods of exuberance, are also down by over 70% since their peaks in November 2021 and have lost over $2 trillion in market value. NFT markets, priced in ETH, inevitably followed, with any money gained just as quickly disappearing into thin air. While blockchain technologies continue to hold promise, speculative digital currencies seem less like stores of value than like tulips.

After all this, investment in African startups is starting to look a little less crazy. In fact, African startup investing, is looking like one of the strongest asset classes in global markets.

African startup markets reached record levels in 2021 to over $5 billion, which represents a nearly 20x increase since 2015, according to a joint report issued by Endeavor and McKinsey.

Investments from influential global investors like Peter Thiel, Jeff Bezos, Tiger Global, Dragoneer and many other global investors and corporates signaled a change in risk perception in African startups. African startups, like Chipper Cash and Flutterwave, are displayed prominently in Silicon Valley portfolios as outperformers. As a result, 2021 saw massive inflows of new investment by first time investors. Leading Silicon Valley VC Andreessen Horowitz made its first ever investment in an African startup, joining Carry1st’s Series A, accompanied by Google and Avenir Growth, another $2 billion growth stage investor.

The difference, however, between investing in African startups, which, from low seed stage valuations, are reaching unicorn status, representing orders of magnitude returns for early investors, and crypto investments, which are speculative bets that demand for the digital asset will be more than their supply, or even in public equity markets, which have driven large company valuations into the trillions of dollars, is that the cash flowing into African startups is actually needed.

Investments in startups vs. secondary investing

Africa has suffered from underinvestment for decades. With only 2% of global Foreign Direct Investment, according to the UN World Investment Report, representing $34 per capita, relative to $326 per capita into Asia, and distributed primarily to resources exporters, Africa has been starved for capital.

Startup companies in Africa are solving real problems, where existing businesses either do not exist or do not have the dynamism to make changes. Fintech companies are providing access to financial services where legacy banks have not deigned to lift a finger, content seeking rents as regulated entities with high barriers to entry. Logistics companies have filled voids left by decrepit and underfunded national postal services as well as skittish domestic delivery presence by large logistics firms like DHL or Fedex. Fragmented informal supply chains are becoming more efficient through technology, and health care delivery is being expanded by well funded startup companies.

The point is that the investment in African startups does not simply go to asset value inflation. Investments in technology enabled real economy startups solves real life problems, enabling companies to hire competitively, to develop in-house technologies, and to expand across the borders of a giant continental land mass.

We need to think about this the next time we are tempted to invest into speculative bubbles. Investing in African startups, which means allocating excess capital to areas which require that capital, is productive use investment, not just speculation on the secondary markets.

What the data show 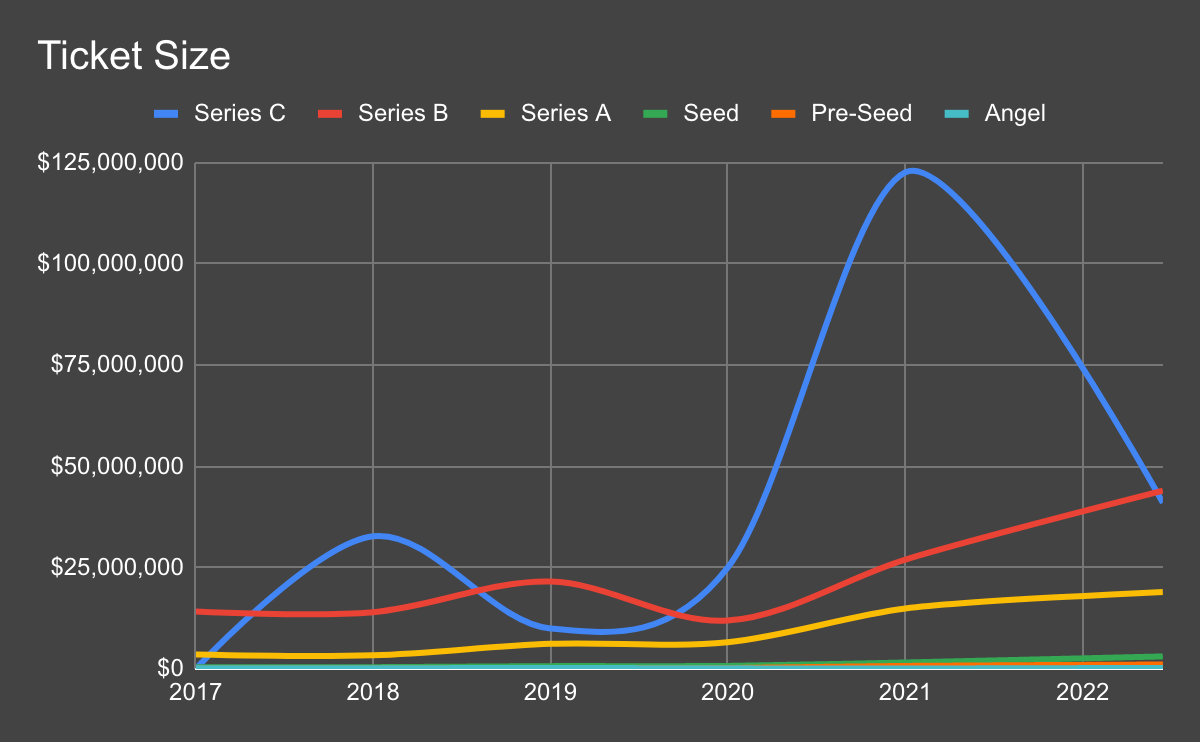 Investing in African startups has continued strong into the first half of 2022. This year, by June, startups have raised over $2.3 billion from global investors across a range of sectors. An analysis of average funding round sizes, which can perhaps be used as a proxy for investor confidence and enthusiasm, has continued to grow this year, with the exception of Series C investments, where investors typically participating in those larger growth rounds may have suffered from the larger global downturns.

But for pre-Seed through Series B startups, which are driven by the potential for scalable problem solving innovation, investor interest remains strong, as indicated by increases in average ticket sizes and average number of investors per round.

A beautifully complied, if not partially incomplete, data set by the Financial times of the top 50 growing African companies, reflects a trend of strong revenue growth in Africa. The 20 technology companies on the list show an average of 1,081% absolute revenue growth, reflecting an average compound annual growth rate (CAGR) of 82% since 2017. Equally important, from a perspective of job creation as well as use of funds raised from investors, average employee growth reaches 259%.

Companies which have successfully raised Series B and Series C rounds this year, such as Wasoko, which raised $125 million earlier this year, and MFS, which raised $200 million, have touted their large growth, with Wasoko reaching $300 million in GMV and MFS with 320 million mobile wallets across more than 35 African countries. Ostensibly, each of these graduating startups began life through small single digit fundraises with zero revenues less than 10 years prior. Investment directly into promising startups can generate real revenue growth and real value creation, not just asset price inflation.

One of the key features of venture capital is its tolerance to risk, a feature which is particularly suited to investing in the inherently risky business environments in many African countries. The high variance in expected returns, whereby a proportion of the portfolio is expected to generate zero to flat returns and another proportion, outsized returns capable of covering the entire fund, provides this risk tolerance which is characteristic of venture capital portfolios. In fact, many of the outperforming early private equity portfolios, such as the African Capital Alliance CAPE I Fund, which generated a 17x return based mostly on the strength of a single investment in its portfolio, the teleco MTN, benefited from double digit multiples of invested capital for specific investments, covering losses elsewhere.

The ability to use digital payment methods in Africa, or for SMEs to have access to loans for the first time, facilitated by a startup, or for a domestic delivery to be made in a day instead of a week, has little to do with global markets. As a result, the return potential for African startup investing, in the lingo of portfolio theory, is substantially non-correlated with western markets. A weak African industrial base means that there are few exports which could be negatively impacted by slowing western demand. Gains from investment in Africa come primarily by expanding access to products and services: for example, providing solar electricity, enabling farmers to irrigate their fields, or avoiding losses originating from informal supply chains, lack of cold storage or other sources of inefficiency, and returns from investment in health and education, which can create better trained and healthier workforces.

There is a good reason that African investing, channeling surplus global capital to areas of productive use, could actually be safer and benefit from stronger returns than other asset classes, which often reflect the fluttering of the capital markets instead of real investments in productive assets. Let’s continue to drive up our investing in Africa.